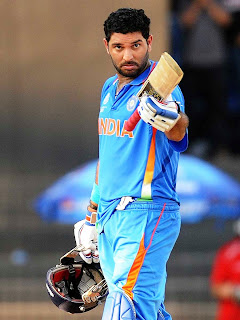 India star Yuvraj Singh has told his team-mates to seize the moment and capitalise on Australia's vulnerability when the teams meet in Thursday's World Cup quarter-final.
Yuvraj scored a century and took two wickets with his left-arm spinners as India beat the West Indies by a convincing 80 runs on Sunday to set-up a last eight clash against champions Australia in Ahmedabad.
India will go into the match buoyed by victory, Australia -- aiming for a fourth successive World Cup title and fifth in all -- suffered a four-wicket loss to Pakistan last time out where they were bowled out for just 176.
Defeat ended Australia's 34-match unbeaten streak at the World Cup dating back to 1999 and it was their batting, particularly the poor form of captain Ricky Ponting, that encouraged Yuvraj.
Ponting fell for 19 and in five innings at this World Cup has managed just 102 runs in all with a best of 36.
Not that Yuvraj, who hadn't turned two when India won their lone World Cup title back in 1983, was writing off Australia's chances completely.
"They've won four games at this World Cup. Teams are equal at the moment, it's just who plays better on the day," said Yuvraj, whose 113 was the centrepiece of India's 268 all out against the West Indies.
"Australia are a top side, they've won three successive World Cups but Shane Warne, Glenn McGrath, Adam Gilchrist and Matthew Hayden are not there.
"You can get into the middle-order and Ponting is not in great form. If we can get into their weaknesses, we can win the quarter-final."
Injuries and loss of form have blighted Yuvraj's career in recent times.
But runs -- he'd also scored three fifties -- and wickets have come his way at the World Cup where he has been named man-of-the-match in three of India's four wins to date.
Sunday's innings was especially pleasing for Yuvraj as it marked his first ODI hundred in nearly two years since he made 131 against the West Indies in Kingston in June, 2009.
"Batting at number four, you get an opportunity you don't get at five," explained Yuvraj, who battled stomach cramps that led to vomiting during the course of his innings.
"I wanted to hit ball down the ground and not in the air."
India can expect to be roared on by a partisan crowd in Ahmedabad but Yuvraj, while grateful for the support, said motivation was primarily a personal issue.
"You are playing a World Cup quarter-final for your country -- you have to give 100 percent. It's the moment of our lives, the moment you live for as a cricketer."
Posted by Mahendra at 12:18 AM