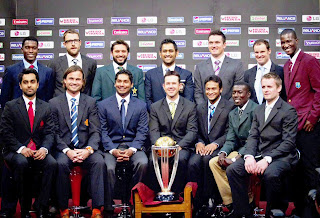 Posted by Mahendra at 6:43 AM No comments: Hello Confectionery Stallers, and welcome to my first ever non-UK-written blog. I am currently in Dubai, on my way to Bangladesh, gazing out over the world’s most ludicrous skyline (well, gazing at a pair of beige curtains, behind which is a brick wall, from the top of which I might be able to gaze out over the world’s most ludicrous skyline).
This is the most open World Cup of the millennium so far, since Herschelle Gibbs unwittingly not only dropped the 1999 World Cup when he shelled Steve Waugh, but the 2003 and 2007 tournaments as well, by boosting Australian confidence so much that they became almost scientifically unbeatable.
The final stages promise to be riveting – seven winner-takes-all shoot-outs, when all the months of preparation could be shattered with one twitch of Billy Bowden’s trigger finger, one extra rotation of a captain’s lucky coin, or Shahid Afridi putting his head on correctly in the morning. The group stage may be less scintillating. In fact, it will certainly be less scintillating. On the minus side, it is significantly and obviously much too long. On the plus side, I’ll get to see more of Bangladesh, India and Sri Lanka than I would have done had the schedule been a little less distended. The early weeks of the tournament may also reveal something of where cricket is heading as a sport: how can the 50-over game and international cricket compete with Twenty20 and the financial behemoth that is the IPL?
I will kicking off my World Cup blog, On the Road with Zaltzman, with the official tournament preview on Friday, including full and irrefutable proof of who will win, and why. And when. In fact, I’ll predict the “when” bit right now. I confidently forecast that victory will be secured at some point on April 2, probably in the evening. And I also predict, with equal confidence, that the winning team will stand around in a circle, with their arms around each other’s shoulders and bounce up and down. The circular bounce has now become the default sporting victory celebration, other than in individual sports, although I am sure all sports fans would love to see a golfer sink a putt on the 18th green to clinch a triumph, then put his arms around his own shoulders and pogo up and down for a couple of minutes before dousing himself in champagne and trying to lift himself onto his own shoulders.
I will then be posting daily pieces for throughout the tournament – mostly blogs, plus occasional podcasts – and will also be doing a Twitter feed from the games and from my travels around the subcontinent, which you can follow at .
I will also unleash a World Cup MultiStat, plus photos, and possibly even the odd video here and there, if I can work out how to use a video camera and edit rudimentary video footage without making people’s eyes hurt. (My inexperience is not necessarily an insurmountable problem. Quentin Tarantino’s first forays into film-making were his home movies from the 1956-57 South Africa v England Test series. That is a lie. But it would nonetheless be interesting to see his take on one of the slowest-scoring series of all time, starring Samuel L Jackson as Colin Cowdrey and Uma Thurman as nagging South African offspinner Hugh Tayfield).
And there will be a regular Q&A, for which you will be able to submit questions, which I will (a) attempt to answer, (b) dodge, or (c) wilfully misinterpret. Full details of this will follow on the website.
Posted by Mahendra at 3:12 AM No comments:

DHAKA - 17th February 2011
India will look to settle an old score against an increasingly confident Bangladesh when the co-hosts meet in an intriguing opening match of the World Cup on Saturday.

On paper, the day-night clash at the Sher-e-Bangla stadium in Dhaka may look like a no-contest with tournament favourites India having won 20 of their 22 one-day matches against the Tigers.

But the two defeats at Bangladesh's hands will rankle Mahendra Singh Dhoni's men when they take the field in front of some 25,000 partisan fans baying for India's blood.

A 15-run defeat in Dcember 2004 in Dhaka was followed by a stunning five-wicket loss during the 2007 World Cup in the Caribbean, which knocked India out in the first round.

Indian vice-captain Virender Sehwag, never one to mince words, told reporters ahead of the tournament that his team was charged up for what is widely seen as a grudge match.

"We have not forgotten that World Cup loss," the aggressive opener said. "We can't wait to play them again, and I am confident we will do better this time."

Bangladesh, who also defeated mighty South Africa in the second round of the last World Cup, could not have asked for a better setting to challenge the Indians.

The victories included an astonishing 4-0 rout of Daniel Vettori's New Zealand in October.

Athar Ali Khan, who played the last of his 19 one-dayers for Bangladesh in 1998 before becoming a TV expert, said the current team had the potential to deliver.

"We played for survival, these lads play to win," Khan said. "I have a lot of faith in this team."

Bangladesh will, however, miss former captain and pace spearhead Mashrafe Mortaza, who was ruled out of the tournament due to a recurring knee injury.

Mortaza, 27, has been the pivot of the Bangladesh attack with 146 one-day wickets, including a match-winning 4-38 against India in the last World Cup.

Bangladesh will depend on the left-handed openers, Tamim Iqbal and Imrul Kayes, the fluent Junaid Siddique and former captain Mohammad Ashraful to give the spinners a reasonable total to defend.

India have enjoyed an impressive run over the last three years, which has taken Dhoni's men to the top of the Test rankings and made them number two behind Australia in the one-dayers.

They go into the Cup opener on the back of two convincing morale-boosting wins over Australia and New Zealand in practice matches this week.

The Indians rely mainly on its powerful batting, led by world recorld holder Sachin Tendulkar, to pile up a big total and bat the other side out of a match.

With Sehwag, Gautam Gambhir and Yuvraj Singh adding to a top-heavy line-up and Dhoni and the explosive Yusuf Pathan coming down the order, Harbhajan Singh has been pushed to number eight despite two Test centuries to his credit.

The pressure on Saturday will be entirely on India, but Dhoni chose to calm team-mates by stressing the importance of doing the basics right.

"We should not worry about winning and losing, just concentrate on doing the small things correctly," he said. "Then everything will fall in place.

India and Bangladesh have been drawn with England, the West Indies, South Africa, Ireland and the Netherlands in group B, with the top four advancing to the quarter-finals.

Posted by Mahendra at 2:17 AM No comments:

Yuvraj Singh in the Warm Up Match at M Chinnaswamy Stadium

Australian Wicekt keeper Tim Paine with team mate celebrating the wicket of Yuvraj Singh in the Warm Up Match at M Chinnaswamy Stadium in Bangalore.
Posted by Mahendra at 3:14 AM No comments: