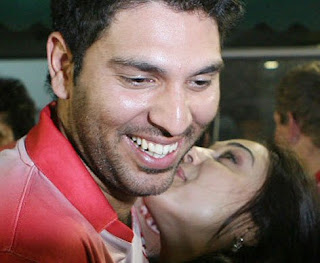 India beat South Africa by one run in low-scoring thriller

South Africa made a mess of what should have been a comfortable chase of a below-par total at Wanderers, stumbling in the batting Powerplay and then sinking to a dispiriting defeat in a thrilling finish. In conditions less favourable for batting than what the venue has offered in the past, Graeme Smith had put South Africa on course with a positive innings but his wicket in the 33rd over triggered a collapse that was a product of panic, ill-luck and some needling Indian bowling. Munaf Patel's spell proved decisive as he dislodged Smith and ended the South African innings with two wickets in the 43rd over, when the hosts were just a shot away from victory.

The game was still South Africa's when Munaf began bowling the 43rd over. Four runs were needed with two wickets in hand but what clinched the game for India were two short-of-a-length deliveries that the tailenders, Morne Morkel and Wayne Parnell, who had batted calmly until then, felt were too good to resist. With three needed for victory, Morkel slashed one straight to the substitute fielder Yusuf Pathan at point and, off the last ball of the over, Parnell, keen to finish off the game, cut Munaf to Yuvraj Singh, sparking wild celebrations in the Indian camp while leaving South Africa shell-shocked at their sudden capitulation.

The result had seemed unlikely with Smith's assured presence at the crease. He had been ruthless in his treatment of the bad balls, which the Indians doled out more often than their opponents had earlier in the day, and had eased the pressure despite periodic breakthroughs at the other end. Munaf was punished for consecutive boundaries through mid-off and point, while Zaheer Khan was pulled through midwicket when he pitched short. Initially a little rusty against Harbhajan Singh, Smith stepped out to the offspinner to combat the turn and take the ball off a length. He kept threading the gaps in the outfield to squeeze boundaries off the seamers and went past 6000 runs in ODIs.

Smith's shaky yet productive stand with Colin Ingram, a fluent partnership with JP Duminy and an increasingly threatening association with David Miller had continued the one-way traffic set up by South Africa's bowlers. But at 152 for 4, in the second over of the batting Powerplay, a reversal began.

South Africa's bowlers had exploited the movement off the pitch in restraining India, and Munaf had managed to prise out the wicket of Hashim Amla with a delivery that nipped back in. In the 33rd over, he managed to dart one back in from outside off towards Smith, who played on. In the next over, after he had been flicked to the fine-leg boundary, Zaheer shortened his length and dismissed Miller with an offcutter that the batsman failed to pull and gloved to short fine leg. And when he returned in the 36th over, Zaheer was fortunate to dismiss Johan Botha, who was given out lbw playing back to a good-length delivery, when it seemed the ball had only made contact with the outer half of the bat, not with the pad.

Parnell calmed the nerves of a capacity Wanderers crowd with a square-cut boundary and a promising vigil with Dale Steyn. But Steyn's attempt to risk a single and retain strike for the 39th over resulted in a run-out when Yuvraj barely managed to break the stumps before the ball slipped out of his hands. From 177 for 8, Parnell and Morkel braved a determined spell from Zaheer, managed a streaky boundary off part-time offspinner Suresh Raina and took South Africa to within four runs of a 2-0 lead. Only to throw it all away in the next over from Munaf.

South Africa's bowlers may have unable to finish the job with the bat but they had impressed with disciplined bowling performance under overcast skies on a slowish track. India approached their innings cautiously and, using the movement, South Africa's bowlers capitalised on their circumspection. Lonwabo Tsotsobe was the best. His role in ODIs has largely been a containing one but his accuracy amid India's pressure to accelerate earned him his best match haul of 4 for 22. India, too, faltered in their batting Powerplay, losing four wickets for 14 runs to undermine what Yuvraj and Dhoni had achieved during their fighting recovery stand.

The pair had to build from scratch following the wickets of Sachin Tendulkar and Virat Kohli in quick succession. Displaying little signs of getting bogged down, neither batsman felt compelled to take undue risks and instead ensured a steady scoring-rate by working the field. Both used the sweep and the paddle, while Yuvraj often drove straight to pinch twos because long-on that was wider than usual. Bad balls were a rarity but Yuvraj was prompt to punish them when on offer: he slashed Morkel over point and glanced Tsotsobe to the fine-leg boundary to raise his half-century. The stand was worth 83 and with 13 more overs to go, a score of 240 was on. India didn't get that far, though given the manic developments towards the end, they didn't need to.
Posted by Mahendra at 12:15 AM No comments:

New Delhi, January 14 (IANS) India's cricket selectors will meet Monday to pick the 15-member squad for the World Cup that will be played in the sub-continent from February 19.

The selection committee, headed by chairman Kris Srikkanth, will have the task of choosing the best team from the list of 30 probables.

"The senior selection committee will meet on Monday to select the Indian team for the World Cup, " Indian cricket board secretary N. Srinivasan said in a statement.

India are in Group B along with co-hosts Bangladesh, as also England, South Africa, the West Indies, Ireland and Netherlands. India face Bangladesh in the opening match slated for Feb 19 in Dhaka. Sri Lanka is the other host nation.

Posted by Mahendra at 4:48 AM No comments:

Agencies,
Bangalore, Jan 08
The second segment of the players' auction for the fourth edition of the Indian Premier League was a shocker there were no takers for the former Indian skipper Sourav Ganguly and former West Indies captain Chris Gayle, both who were earlier a part of Kolkata Knight Riders.

Mumbai Indian's made their first purchase of the day as they grabbed local boy Rohit Sharma for an exploding sum of USD 2 million. The franchisee also purchased Andrew Symonds, who will now be sharing the dressing room with his old-time foe, Harbhajan Singh (already retained by the team).

Delhi Daredevils to made their first purchase, buying Irfan Pathan for USD 1.9 million.

In a fight of two cats, the monkey took the cake away! That's exactly what happened in first segment of the players' auction.

While Mumbai Indians and Kings XI Punjab fought for the most sought after all-rounder Yuvraj Singh, Sahara Pune Warriors made a very surprise final bid as took they the cake, Yuvraj in this case, home for a whooping amount of USD 1.8 million.

Kings XI Punjab, thus, not only lost their star Indian player, but also failed to bid successfully for their Sri Lankan top-order batsman Mahela Jayawwardene, who was grabbed by the new team in the block, Team Kochi.

However, the highlight of the first segment were Kolkata Knight Riders who grabbed two of their most priced possessions, all-rounder Yusuf Pathan (2.1 million USD) and opener batsman Gautam Gambhir (USD 2.4 million).