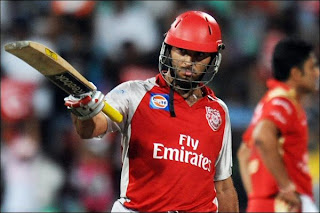 Yuvraj Singh has been named captain of Sahara Pune Cricket Team
Warriors for the fourth season of the Indian Premier League. Debuting in the IPL this year, the franchise includes South Africa captain Graeme Smith, hard-hitting New Zealand opener Jesse Ryder and Sri Lanka allrounder Angelo Mathews among others.
Yuvraj had captained Kings XI Punjab - and initially was their icon player - in the first two IPL seasons, leading the team to the semi-finals of the first edition. In 2009, Punjab finished fifth in the group stage, after which Yuvraj was replaced at the helm with Kumar Sangakkara. Yuvraj was in poor form in the 2010 IPL, and came in for criticism for his batting and attitude.
Yuvraj's appointment as Pune's captain comes soon after his man-of-the-match performance in India's World Cup tie against Ireland on Sunday, in which he picked up five wickets and scored a half-century. The team had previously appointed Geoff Marsh as chief coach, and Dermot Reeve and Praveen Amre as assistant coaches. The set-up also includes India domestic players like Manish Pandey, Abhishek Jhunjhunwala and Mithun Minhas.
Pune will take on Punjab in their opening IPL match on April 10 in Mumbai.
News espncricinfo
Posted by Mahendra at 10:44 PM