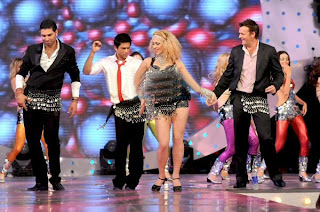 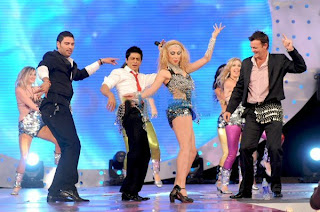 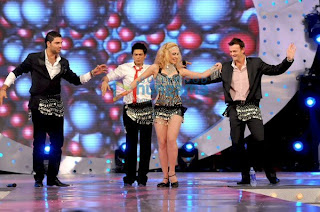 Yuvraj Singh Preity Zinta
Posted by Mahendra at 5:04 AM No comments: 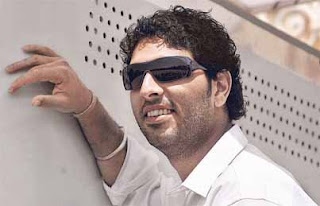 Yuvraj Singh Insults Shah Rukh Khan
Yuvaraj Singh is known for acting on the cricket stadiums and had gradually lost his tempo over games. In the past IPL series, he couldn't even attempt for a better show due to his continuous distractions over IPL night parties and even kept running behind Preithy Zinta.
When Shah Rukh had just marked a funny comment at IPL awards saying that all the girls are always running behind Yuvaraj, the cricketer adamantly left a loose talk saying 'It's all because Shah Rukh Khan always keeps rubbing shoulders with Karan Johar and that's why girl hesitate to run behind him.'
Dashed down in spirits, SRK complained about his misbehavior and left the awards ceremony much before it got over.
Neraya Yuvaraj loose talk pannikittae Irumpaanga Pola….
Posted by Mahendra at 2:20 AM No comments:

How do the planets affect stars? Here's an answer to that somewhat intriguing question. Stars ke sitare analyses the alignment of planets in the lives of our Bollywood stars. What do horoscopes say about celebrities? What do their fortunes hold in store for them? What lies ahead? Astrologers weigh in with their opinions and give you a peek into the future of our entertainment industry. The show also features stars speaking about their signs, lists unusual facts in every episode, reveals the spiritual regime of our celebrities and even pulls out the quirky obsessions of some famous faces. 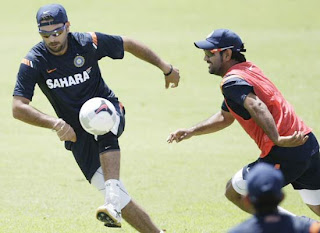 India's captain Mahendra Singh Dhoni, right, and Yuvraj Singh chase train for the Twenty20 Cricket World Cup in Bridgetown
Posted by Mahendra at 1:50 AM No comments: 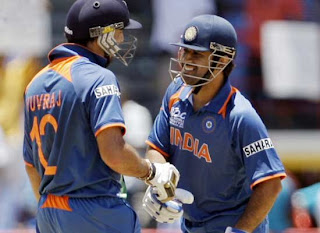 ICC World Twenty20 2010: India ease into Super Eights after defeating South Africa
Suresh Raina blasted 101 off 60 balls as India beat South Africa by 14 runs and moved into the Super Eights at the ICC World Twenty20.
Indian number three Raina had come in after just two balls and hit nine fours and five sixes as he guided India to 186 for five at Beausejour Stadium in St Lucia.
South Africa, opening their Group C campaign, could only manage 172 for five in reply, giving India two wins from two having beaten Afghanistan on Saturday.
South Africa captain Graeme Smith won the toss and elected to bowl.
Rory Kleinveldt took the new ball and claimed the first wicket with his second ball as Murali Vijay went for a first-ball duck, caught behind by Mark Boucher.
Raina and Yuvraj Singh came together at 32 for two and added 88 in 10.2 overs before Yuvraj was caught by Smith off Kleinveldt for 37.
Raina and Yusuf Pathan kept the tempo up, blasting Kleinveldt for 25 in the 18th over.
Raina brought up his century in style with a six in the final over and was out next ball, caught in the deep by AB de Villiers off Albie Morkel before captain MS Dhoni added eight more runs, including a six off the last ball.
South Africa preferred Loots Bosman over Herschelle Gibbs as an opener alongside Kallis, but runs came slowly, Bosman hitting eight off 14 before his dismissal in the fifth over when he was caught by Chawla off Pathan with the score on 21.
Smith came in next but at halfway South Africa had only reached 57 for one.
Kallis reached his 50 off 45 balls and moved South Africa past 100 with a six as he began to change gears, 16 coming from the 15th over.
Smith was run out for 36, ending a 97-run partnership, and Kallis quickly followed, caught by Ravi Jadeja off Chawla for 73.
That left South Africa 128 for three with 21 balls remaining and 59 runs needed.
It was too tall an order, despite de Villiers hitting 31 from 15 balls.
Posted by Mahendra at 5:31 AM 1 comment: 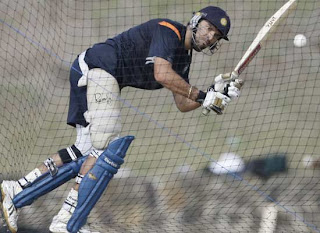 In the first of an occasional series, we at the Reverse Sweep will name and shame those cricketers that we believe to be massively over-rated.

We start with Yuvraj Singh, the Indian and Kings XI Punjab 'all-rounder' who somehow gets regularly bracketed with the great Indian batsmen of the modern era; namely Sachin Tendulkar, Rahul Dravid, Sourav Ganguly, VVS Laxman and Virender Sehwag. In our opinion, Yuvraj is not fit to tie their bootlaces.

Admittedly, Yuvraj has some talent and there has been the odd sporadic good innings in test, ODI and T20I cricket - just ask Stuart Broad about the latter after Yuvraj smited six sixes off him during the World T20 in 2007. The innings he played in support of Sachin Tendulkar when India chased down 387 to beat England at Chennai in 2008 was another example, but on the whole he has not justified his talent and inflated ego.

His test career has been disappointing with an average under 36 and only three hundreds in his 33 tests. When you consider the fact that most of these tests have been played on the batting paradises of the subcontinent that average is only worth about 30 to an English or Australian player. By sheer coincidence that is what Graeme Swann and Nathan Hauritz average.

Yuvraj's record in ODI is better with 12 hundreds in his 250 ODI (at just over 37) and he has a good strike rate of 88. But it is hardly the record of a world-beater and another point for the prosecution in the accusation that he is nothing more than an average player. His T20I record is the best of the lot, with a strike rate of 161 and an average of 39. But just ask Kings XI Punjab fans if they think that Yuvraj is worthy of his reputation following his on and off-field performances this season. More of that later.

Kevin Pietersen once labelled Yuvraj a 'pie-chucker' with the ball and then promptly got out to him. But the stats seem to back KP up. Eight test wickets at 54, 82 ODI wickets at over 40 and only five T20I wickets hardly puts him in the Shane Warne category, or even Marcus North's for that matter.

But no-one rates Yuvraj more highly than Yuvraj himself. And it is that arrogance that made him our first 'Over-rated Cricketer' and also contributed to his dire season with Kings XI Punjab. He appears to have an ego the size of Jupiter and has clearly been influenced by the bollywood style celebrity cult currently surrounding Indian cricket thanks to the. But he is not as good as he seems to think he is (although that would be impossible) and if the numerous rumours are true, has unsettled KXIP to such an extent that he was reportedly the main reason for their dismal season. Apparently he sulked about not having the captaincy, appeared disinterested and unfit, and ruined the karma created by King Kumar.

If even some of this was true, Yuvraj needs to buck his ideas up and look to Tendulkar, Dravid and MS Dhoni as examples of how to cope with fame and handle yourself in front of an adoring public. Only then will Yuvraj justify his talent and lose the over-rated tag.

Posted by Mahendra at 5:25 AM No comments: