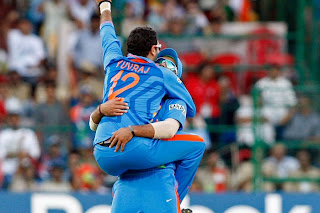 Yuvraj Singh put in a superb all-round display as India survived some anxious moments to post a five-wicket victory over a fighting Ireland in its World Cup match on Sunday.
The part-time spinner bagged a maiden five-wicket haul to restrict Ireland to a modest 207 and then hit an unbeaten 50 to help his side achieve the target with four overs to spare in the day-night match in Bangalore.
India were wobbling at 4 for 100 before Yuvraj and skipper Mahendra Singh Dhoni (34) added 67 runs for the fifth wicket.
Yusuf Pathan gave the finishing touches to India's second win in three matches with an attractive 24-ball 30 not out, which included two sixes and one four in one over from left-arm spinner George Dockrell.
"I think the most important thing is that everyone got a chance to bat. We were batting under pressure," said Dhoni, whose side now sits top of Group B.
"We are showing signs of improvement. I feel it's important to peak at the right time because it's a long tournament. What we have seen is slow and gradual improvement in the bowling side."
Ireland captain William Porterfield, who made an impressive 75 as opener, said his side was 40 runs short of a challenging target.
"I think we got ourselves into a great position after losing two early wickets. We're fighting well and we fought right until the end. An extra 40 runs could have been interesting," he said.
Ireland, who upset England in its last match at this venue on Wednesday, made India struggle for runs with its disciplined bowling and brilliant fielding.
Paceman Trent Johnston, who became the third Irish player to figure in 50 one-day internationals, jolted India when he dismissed Virender Sehwag (5) and Gautam Gambhir (10) in his opening three overs.
Johnston, who sustained an injury after falling on his follow-through, did not bowl after five overs.
India looked in trouble when Sachin Tendulkar (38) was trapped LBW while attempting to sweep Dockrell and Virat Kohli (34) was run out. The pair added 63 for the third wicket.
Left-arm spinner Yuvraj (5 for 31) earlier played a key role in restricting Ireland despite an impressive 75 from Porterfield.
His victims included Kevin O'Brien (9), who hammered the fastest century in World Cup history against England, as Ireland lost its last eight wickets for 85 runs in a dramatic collapse.
Yuvraj gave the capacity crowd plenty to cheer about after left-arm paceman Zaheer Khan had rocked Ireland with two early wickets.
Porterfield, dropped on 0 by Pathan in the slips off Zaheer, went on to complete his fifth half-century in one-dayers before being caught in the covers off Yuvraj. He hit one six and six fours.
Ireland was on course to post a challenging total following a 113-run stand for the third wicket between Porterfield and Niall O'Brien (46) before it slipped from a healthy 2 for 122.
It suffered a crucial blow when well-set Niall O'Brien was run out after completing 1,000 runs in one-day internationals. His brother, Kevin, failed to repeat his heroics from the last match as he offered a return catch to Yuvraj.
There was no hint of the slide when Porterfield and Niall O'Brien were steadying the innings after Zaheer's double strike. The Irish pair never looked in trouble, comfortably gathering runs against both pace and spin.
Zaheer struck with the fourth delivery of the match when he bowled Paul Stirling for a duck before having Ed Joyce caught behind for four.
Posted by Mahendra at 11:08 PM