Media frenzy over Yuvraj Singh special someone at World Cup 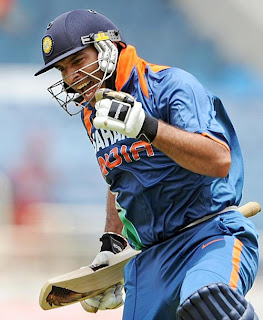 Media frenzy over Yuvraj's 'special someone' at World Cup
India's swashbuckling all-rounder Yuvraj Singh whipped up a media frenzy on Friday by refusing to identify the 'special person' who is the driving force behind his World Cup success.
The left-hander, 29, conjured up a magical performance in the quarter-final win against Australia on Thursday, grabbing two wickets and making an unbeaten 57 to shape India's five-wicket victory over the champions.
The victory sets up a semi-final with arch-rivals Pakistan in Mohali on March 30.
Yuvraj, named man of the match for the fourth time in the tournament, then revealed during the post-match press conference that there was someone special in his life behind his recent success.
"I am playing this tournament for a special person. That special person always comes into my mind whenever I am in a pressure situation."
Yuvraj promised to reveal the identity if India made it to the April 2 final in Mumbai.
"Hopefully it will work out in the end," he quipped.
Yuvraj's half-disclosure was lapped up by hungry Indian news channels, one of which promptly started a programme urging viewers to send in their opinion on who they thought was the mysterious person in the cricketer's life.
The Punjab player, who has 341 runs and 11 wickets in the tournament so far, joked it was the first time he had been applauded at a press conference.
After recent struggles with form and fitness, he was asked if everything he was touching was now turning to gold.
"I think so. Last year, whatever I was doing was turning into mud," he said. Yuvraj admitted his success against the defending champions was the stuff of dreams.
"I have been thinking about beating Australia in this World Cup for a year, that I would be there till the end and winning the game for India.
"I honestly thought about this 365 days of the year. I have been dreaming of this. Probably because Australia are three-time (successive) champions," explained Yuvraj.
Yuvraj's fourth 50 in six innings, also including a hundred, took his average at this World Cup to an astonishing 113.66.
It also represented a remarkable turnaround after he'd not that long ago found himself out of the side.
"This is a moment we live for," added Yuvraj who said the match against Pakistan would be another 'dream game' for India.
However, asked about the tactics for that match, he joked: "I'm sure whatever plans we have for Pakistan, MS (Dhoni) will tell you at the next press conference.
"We are just doing the best we can."
News .deccanchronicle
Posted by Mahendra at 4:04 AM