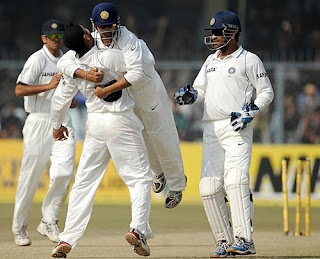 NEW DELHI — India will be without three key players, including Rahul Dravid and Yuvraj Singh, when they defend their number one Test ranking against South Africa next month.

Key batsmen Dravid and Yuvraj, and pace bowler Shanthakumaran Sreesanth, were on Thursday excluded from a 15-man squad for the first of two Test matches starting in Nagpur on February six.

The second-ranked South Africa need to win the series 2-0 to displace India from the top. A 1-0 result in favour of the Proteas will leave both teams level on 123 rating points.

Dravid fractured his jaw bone and Yuvraj tore a cartilage on his left wrist during the second Test against Bangladesh in Dhaka earlier this week.

Sreesanth suffered a hamstring strain during the first Test of the same series in Chittagong.

All three players are also likely to miss the second Test against the Proteas in Kolkata from February 14, the team for which will be named later.

Veteran batsman Venkatsai Laxman, who needed stitches on a bruised finger during the Chittagong Test, was declared fit to play.

Badrinath is still to play a Test after three one-day appearances, while Saha replaces Dinesh Karthik as the second wicketkeeper, behind skipper Mahendra Singh Dhoni.

Posted by Mahendra at 1:16 AM No comments:

The injury woes of the Indian team worsened as Yuvraj Singh was the latest to join the list of the walking wounded. “Yuvraj has a torn cartilage in his left wrist but he will stay till this game. He is out for a while though and will struggle to make it for the first Test against South Africa,” Gary Kirsten said.

Speaking about Rahul Dravid, who suffered a facial fracture due to a bouncer from Bangladesh speedster Shahadat Hossain during the second day of the second Test at the Sher-e-Bangla Stadium, Kirsten said: “Dravid has got quite a nasty injury to his face. He is currently staying with us in Bangladesh. Later, he will consult a specialist to find out what’s to be done and how long he would be out. For Dravid, we don’t have the long-term prognosis yet.”

Sachin Tendulkar too survived a scare when he fell on his shoulder while attempting to catch Tamim Iqbal’s miscued hit here on Tuesday evening. However Kirsten said that there was nothing to worry. “Tendulkar is okay and he will be fine.”

Earlier there was no clear and concise information about the injury status of key players. The day began with manager Arshad Ayub saying, “Yuvraj is ruled out of the match.” However when M.S. Dhoni seemed headed towards a probable century, Yuvraj was padded up to come in at number 11 though he stayed back after his skipper was dismissed and the Indian first innings was declared. In discomfort, Yuvraj never came to field later in the afternoon and Kirsten’s words confirmed the worst fears.

For Dravid, Monday’s mixed bag of equalling Sir Don Bradman with 29 centuries and getting struck by a bouncer, was followed by a discharge from the hospital on Tuesday morning. Dravid may leave for home on Wednesday.

The injuries to Dravid, Yuvraj and the earlier ones suffered by V.V.S. Laxman and S. Sreesanth will pose tricky questions for the selectors when they meet at Mumbai on Thursday, to pick the Indian team for the two Tests against South Africa at Nagpur (Feb. 6-10) and Kolkata (Feb. 14-18).

India on Thursday named a 15-man squad for the first of two Test matches against South Africa, which will start in Nagpur on February 6.

The team for the second Test in Kolkata from February 14 will be named later.

It's Raining Cash on Indian Cricketers after Twenty20 WC Triumph

It’s Raining Cash on Indian Cricketers after Twenty20 World Cup Triumph The cricket crazy nation, India celebrates its memorable victory in the inaugural Twenty20 World Cup. Cricket is considered as a religion in India and the cricketers are worshipped as gods. It was evident when the triumphant team returned from South Africa.
Not only they got a grand welcome, but also gifts and cash prizes were showered on them like flowers. According to unconfirmed sources, some of Indian cricketers have already booked international luxury real estate houses. they became richer and richer overnight, thanks to T20. Here’s a list of the prize money and gifts received by the Indian cricketers so far.
1) the Indian team received a prize money worth $490,000 for winning the Twenty20 World Cup.
2) the BCCI (Board of Control for Cricket in India) announced a prize money of $3 million (Rs 12 crore) for the team. Each member got a check of Rs 80 lakhs.
3) a special cash reward of Rs 1 crore given to Yuvraj Singh for his 6 sixes in an over.
4) the support staff including the Manager, Bowling Coach, Fielding Coach and Physio got Rs 15 lakhs each.
5) Lalit Modi, Vice President of BCCI gifted a Porsche car to Yuvraj Singh on his personal capacity.
6) Neosport presented a Mercedes car to R P Singh for excellent bowling performance in the tournament.
7) Sahara India has announced to give flats (worth Rs 25 lakhs = $62,500) to each cricketer.
the Delhi government has decided to offer free Air services to all members of Team India for 5 years.
9) Air India and Indian Airlines announced out-of-turn promotion for some cricketers including Dhoni, Uthappa, Gambhir and Harbhajan Singh. they will also get a steep hike in their salary.
10) the Haryana government has given Rs 21 lakhs to Joginder Singh.
11) the Karnataka government has announced a cash reward of Rs 5 lakhs each for player Robin Uthappa and bowling coach Venkatesh Prasad.
12) Maharashtra government has announced a reward of Rs. 10 lakhs each for Ajit Agarkar and Rohit Sharma.
13) Virender Sewhag and Gautam Gambhir will receive Rs 5 lakhs each from the Delhi government.
14) the Kerala government has announced a cash reward of Rs 5 lakhs for S Sreesanth.
15) the Baroda Cricket Association has handed over checks worth Rs 11 lakhs each to Pathan brothers – Irfan Pathan and Yusuf Pathan. In addition, they also received Rs 5 lakhs each from the Gujarat government.
16) RP Singh became the first recepient of the Manyavar Kanshiramji International Sports Award that carries a reward of Rs 10 lakhs.
17) the Jharkhand Government has bestowed the first “Jharkhand Ratna” award on Mahendra Singh Dhoni. According to the Chief Minister of the state, Dhoni will get a “surprise gift” on arrival.
18) the Union government has decided to give Z+ Security cover to M S Dhoni. Although it’s not an award, only few eminent and VVIP persons in the country receive such security cover.
Please Note:
10 lakh = 1 millon
1 crore = 100 lakhs or 10 million
1 lakh = 100 thousand
5 lakh = 1/2 million
Posted by Mahendra at 5:40 AM No comments:

MissMalini’s tipster reported in earlier this evening about a party at Valhalla, South Mumbai over the weekend thrown by party kid Vishal in from London for a few days evidently looking to live it up with his Mumbai pals in style

Meow Factor: That’s what you call a “player” on the field and off it.

Posted by Mahendra at 5:13 AM No comments: 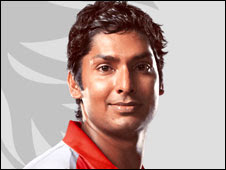 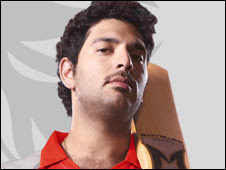 Posted by Mahendra at 6:03 AM No comments: It has now been officially confirmed. Kumar Sangakkara, not Yuvraj Singh, will be captain of the Kings XI Punjab team in the forthcoming IPL season.
Yuvraj Singh has been stripped of the captaincy of the Preity Zinta owned Mohali team for the IPL 3 season because, in the coach’s (Tom Moody) words, the idea was to let Yuvraj concentrate purely on his batting and show his true potential which the team management felt was being hindered with the extra responsibility thrust upon him.
Kings XI Punjab Preity Zinta Kumar Sangakkara Yuvraj Singh
Posted by Mahendra at 1:27 AM No comments:

ndia's Virat Kohli, left, shares a light moment with teammate Yuvraj Singh during a practice session in the nets ahead of the final one-day international cricket match of the tri-series in Dhaka
Posted by Mahendra at 2:57 AM No comments:

Posted by Mahendra at 2:02 AM No comments:

Man of the match: MS Dhoni 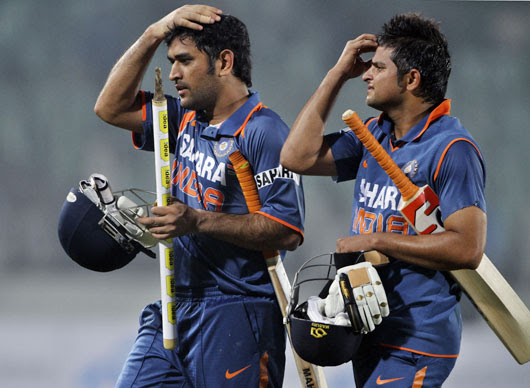 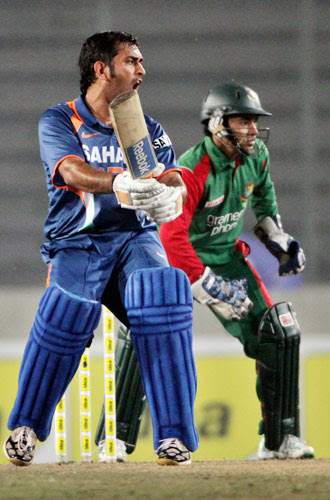 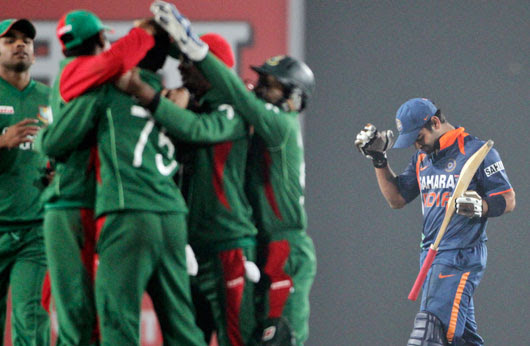 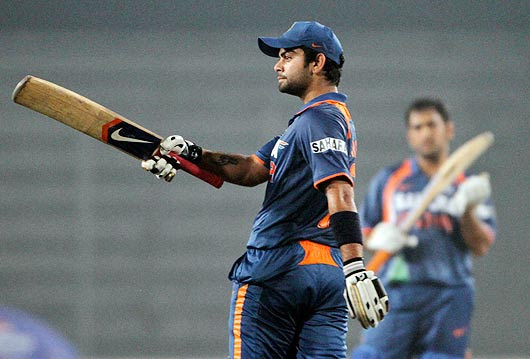 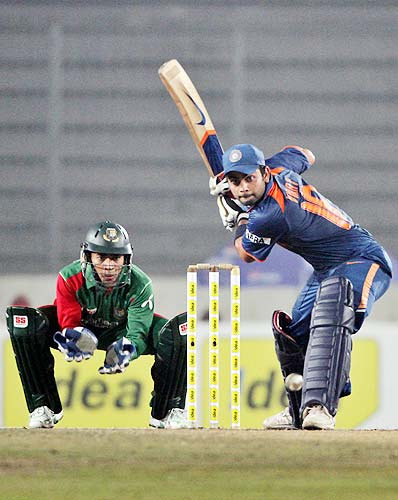 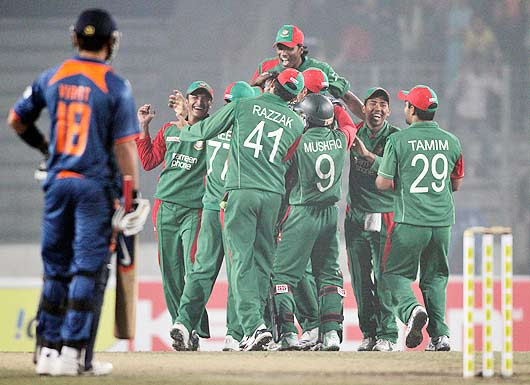 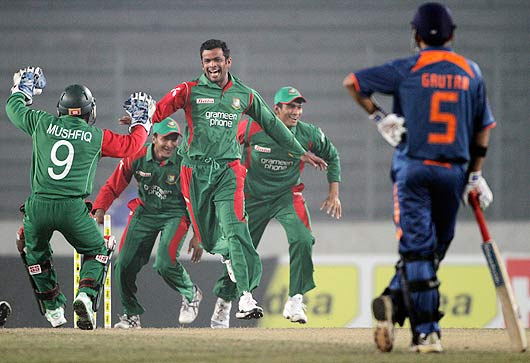 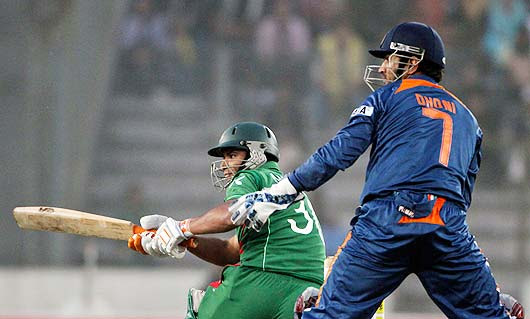 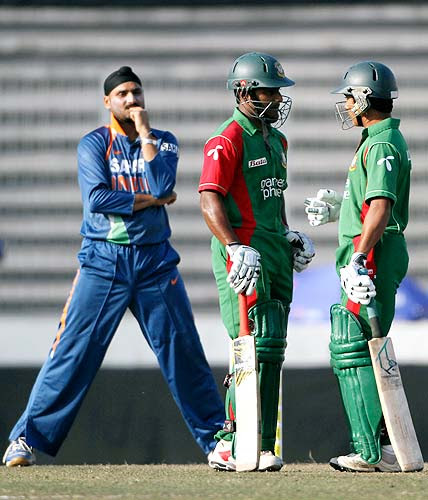 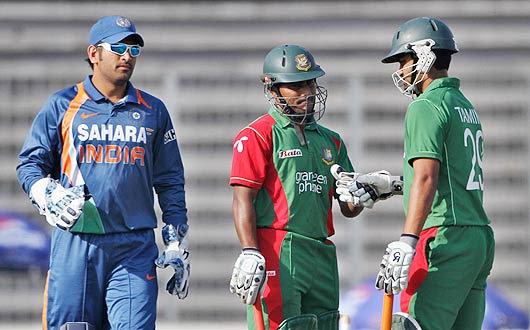 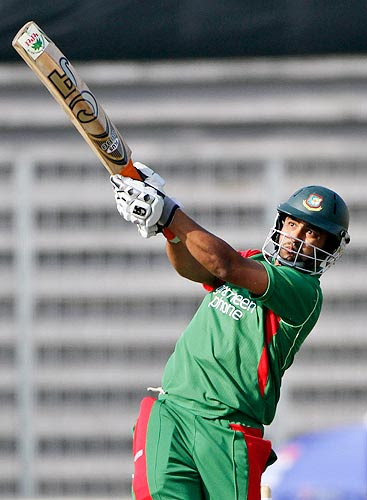 Yuvraj Singh is welcomed of Bangladesh

India's Yuvraj Singh is welcomed by the members of Bangladesh Cricket Board in the airport lounge after the cricket team's arrival in Dhaka.
Posted by Mahendra at 5:51 AM 1 comment: