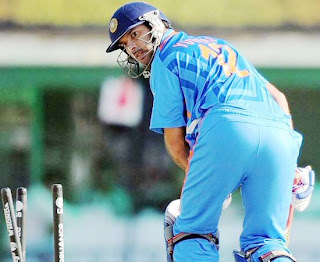 Jammu and Kashmir Chief Minister Omar Abdullah literally turned commentator Wednesday as he flooded Twitter with his ball by ball analysis of the India-Pakistan World Cup semifinal and in the end when India won, he tweeted a sorry to Yuvraj Singh for a dig at the southpaw's failure with the bat.

"Yuvraj Singh I'm sorry for my dig at your batting. You more than made up with the ball. Hat's off to you dude. :-)," Abdullah said, as he was apparently glued to his TV set
The young chief minister, a known sports lover, launched a volley of tweets, some directed at Yuvraj for getting out on a duck, some mocking the decision to play seamer Ashish Nehra, and some on and off remarks on everything in general.

Earlier he had written: "Local hero my butt. He spent more time putting on his pads than he did using them."
"Now for the poor local hero to pull something back and do his magic with the ball. If he does, I promise to say sorry for earlier tweet here," he wrote later.

Peppering a comment with sarcasm over the choice of a fast bowler in place of a spinner, he wrote: "We restricted Australia to 260. If Nehra can bowl a bit of spin, we can win this."

But he had to take his words back later. "Nehra turned out 2 B a bit of inspired captaincy on the part of Dhoni. Amazing how many experts called that 1 wrong. Lots of humble pie."

Omar had a take on captain Mahinder Singh Dhoni as well.
"Need to see the Dhoni of old now not the new sober captain of these days. Why is it every time the commentary box says India is aiming for 350+ we struggle to get to the high 200s?????"

Earlier, when Sahin was getting dropped every now and then, he wrote: "Another dropped catch? Okay Sachin, pliss to make your 100th century and then get out. Thank you :pliss"
"Enough is enough, I think Sachin should "walk" on next drop catch now ;)" came a funny one.

Some of his other comments were: "Kashmir valley is sucking more than 780MW power at the moment & grids R tripping. Please switch off some heaters & lights so more TVs work."

Earlier, during the drink break in Indian innings, he wrote: "Drinks break. Wow, what a heart stopping first 14 overs. And where are all those celebrities the media told us about?????"
"Anyway enough of Twitter for now. I'll come back after the match if I'm not back during the interval. Have a good match tweeple."

"Which jinx ends today? India has never won a CWC (Cricket World Cup) Semi in the sub-continent & Pakistan has never beaten India in a CWC match."

"update: Vodafone's 3G zoozoo has been shot down for flying over #mohali no-fly zone."
News prokerala