Star India batsman Yuvraj Singh announced a Rs. one lakh monetary help to national level football and volleyball player Arunima Sinha on Saturday. Arunima had lost her leg after being thrown out by robbers from a running train near Bareilly.

Yuvraj, who was adjudged player-of-the-tournament in the cricket World Cup which India won after 28 years, described Arunima a "brave sportsperson" and wish her a speedy recovery. "It is really unfortunate and tragic with what has happened to Arunima. She must be brave sportsperson who came forward to fight against robbery. I know the loss is irreparable, but I would like to offer her this little contribution on of one lakh rupees," he said in a statement issued by 'Yuvraj Singh Foundation'.

"I wish her a speedy recovery and in future if she I am of some help she can always contact me," he said. Arunima alias Sonu lost her leg after she was pushed out of the Padmavat Express near Bareilly on Monday night by three men trying to snatch her gold chain when she was travelling to Delhi to appear for a CISF examination.

As she lay on the tracks, another train ran over her left leg. She had fractures on her right leg and also suffered head injuries. Railways has offered her a suitable job while Sports Minister Ajay Maken announced a Rs. two lakh medical compensation and an immediate ex-gratia of Rs. 25,000.

Posted by Mahendra at 1:03 AM No comments: 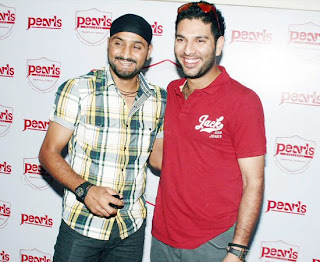 Harbhajan Singh flanked by Yuvraj Singh (Indian cricketers & members of the winning Indian team of the ICC Cricket World Cup 2011) and to announce their Title Sponsorship for the Pearls Challenge (India ODI & T20 series in West Indies) during the press meet in Chandigarh
Posted by Mahendra at 2:16 AM No comments: