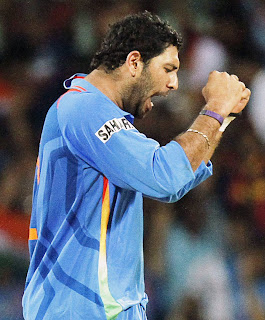 India 268 (Yuvraj 113, Kohli 59, Rampaul 5-51) beat West Indies 188 (Smith 81, Sarwan 39, Zaheer 3-26) by 80 runs
Oh West Indies, they have done it again. For the second match in a row they had a chase all wrapped up but some desperate inspiration from Zaheer Khan and Harbhajan Singh and some mindless cricket from the batsmen who followed Devon Smith ensured that West Indies remained without a win over a Test side other than Bangladesh since June 2009. With Smith playing as well as he has ever played, West Indies almost mocked India for the first 27 overs, getting up to 146 for 2 without a care in the world. Then came a maiden by Harbhajan and a wicked Zaheer slower ball to remove Smith, and West Indies lost the last eight wickets for 34.
That collapse outdid India's own - 7 for 50 - that had threatened to undo Yuvraj Singh's century on a track whose bounce West Indies and Ravi Rampaul exploited, but not to the fullest. Rampaul, the hero of West Indies' last win against a major side, took his first five-for in ODIs on his World Cup debut to hurt the start, the middle and the end of the Indian innings. However, West Indies' insistence on opening the bowling with Sulieman Benn despite the helpful track, and the obvious plan of trying to bounce India out meant they couldn't capitalise on a first over that claimed Sachin Tendulkar. Then there was Yuvraj, with his maiden World Cup century, fighting dehydration, vomiting on the field, and then coming back to take two wickets.
The game might have ended in a whimper, but it began explosively. As they successfully did in the last two World Twenty20s, West Indies came out with bouncers for India. Inside the first 11 overs, two deliveries bounced over the keeper's head for byes, two batsmen got out to deliveries dug in short, one was dropped off another short delivery, but Benn went for 21 off his three overs to ease the pressure. To make matters worse Darren Sammy dropped Yuvraj twice, chances not easy but not impossible, at 9 and 13.
Working with Yuvraj was Virat Kohli, for whom it was almost a homecoming to bat at No. 3 in the absence of the injured Virender Sehwag. In familiar environs of not having to score at a strike-rate of 150, Kohli did just what was required on a tough pitch after a tough start, scoring 59 off 76, letting Yuvraj take the majority of the strike in a 122-run partnership, after the two had come together at 51 for 2.
Even after Yuvraj was reprieved twice, the bouncers still kept coming, the odd ball still misbehaved - especially for the left-hand batsman. He got dehydrated and threw up but nothing seemed to be able to stop the Yuvraj specials in between, shots that kept the scoring rate up in the middle overs. Kohli was smart too: he had played 21 deliveries when Yuvraj came to join him, but so good was the strike manipulation that Yuvraj had played 12 more deliveries than him by the time their partnership ended.
During the partnership, Yuvraj pulled over midwicket, cover-drove for fours along the ground, swept the legspin of Devendra Bishoo, and on-drove Sammy over long-on for a majestic six. It was one of those days when Yuvraj was feeling it, one of those days when he plays one level above the game around him. His mates, though, managed to engineer another collapse from 218 for 3 in the 42nd over.
Buoyed by that good finish with the ball, West Indies came out positive. As Rampaul stood up in the absence of the unwell Kemar Roach, so Smith did in place of the injured Chris Gayle. He cut furiously - almost every bowler got a taste of his trademark shot - he picked singles straight to infielders, doubles straight to those in the deep. However, R Ashwin, who got his World Cup debut at long last, was difficult to hit with the new ball. He used his carrom ball to remove the potentially explosive Kirk Edwards.
Still Smith and Darren Bravo first, and Smith and Ramnaresh Sarwan thereafter kept knocking off the runs calmly. The running between the wickets, and then the odd boundary to break a string of dots, remained a feature. The panic and rush that characterised their effort against England was conspicuous in its absence. With Smith scoring at will, and West Indies needing just 123 in the last 23 overs, only West Indies stood in the way of West Indies.
Turned out they needed a bit of help from India to kickstart the collapse. It came through a maiden from Harbhajan, who came back remarkably after an uninspiring spell of four overs for 23 with the new ball. Harbhajan and Munaf Patel put together a spell of 19 balls for just eight runs before Zaheer was called upon to provide the exclamation mark.
And how he did, with his new knuckle slower ball, where the middle finger doesn't hold the ball tightly, thus taking the pace off without giving any indication to those who are watching from the front. With that slower ball, he removed Smith's off stump after a virtually faultless innings. After that, the procession began. Kieron Pollard holed out to long-on at the first sight of pressure, Sammy was sold down the river by Sarwan, Devon Thomas and Andre Russell fell to the wiles of Yuvraj, and it was all over.
The way West Indies and India collapsed, conspiracy theorists will waste no time in suggesting that both teams wanted to avoid Australia in the quarter-final. As it turned out, West Indies finished fourth in Group B, thus getting Group A leaders Pakistan in Dhaka. And India renew hostilities with Australia in Ahmedabad.
Sidharth Monga is an assistant editor at ESPNcricinfo
Posted by Mahendra at 2:20 AM