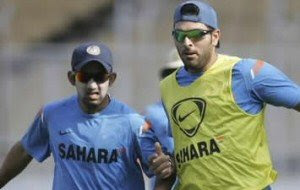 India's previously depleted side received a further blow just before the start of the second Test match against Sri Lanka at the Sinhalese Sports Club Ground on Monday as both Yuvraj Singh and Gautam Gambhir were ruled out due to fitness issues.According to reports, while dashing opener Gautam Gambhir has suffered a knee injury, middle-order bat Yuvraj Singh is suffering from high fever.

Sources also said that Murali Vijay and Suresh Raina are likely to be drafted into the playing eleven in place of the duo.India are already missing fast bowlers Zaheer Khan and S Sreeanth due to injuries. Sri Lanka`s fast bowler Lasith Malinga has also been ruled out of the match due to a knee problem.

The second of the three-match Test series between India and Sri Lanka kicks off on Monday at the Sinhalese Sports Club Ground in Colombo.India had lost the first Test played at Galle by 10 wickets.The visitors were outplayed in all departments of the game in the first match and they risk being dislodged from their ICC top ranking, besides surrendering the three-match series, if they lose the second Test.

A 2-0 or 3-0 series scoreline in Sri Lanka`s favour will remove India from the perch and lift the hosts to the top spot.India can regain their top ranking if they win the third Test starting on August 3 at P Sara Oval as a 1-2 series loss will keep them safe at the perch.A loss in the second Test will also mean that India continue their 17-year-old jinx of not winning a Test series in Sri Lanka after Mohammad Azharuddin-led side`s feat in 1993.

Indian captain Mahendra Singh Dhoni has said that lack of experience in the pace attack and failure to build partnerships while batting have cost his side the first Test."We lacked experience in bowling. It was a learning experience for the seamers, but they did a decent job. We did not have big partnerships while batting. Once you lose your top six or seven batsmen and if you don`t have too many runs on the board it becomes very difficult," Dhoni had said after the first Test.

With the pace bowling resources severely depleted in the absence of strike bowler Zaheer Khan and S Sreesanth, the onus is now on the batting stars to perform and pile up runs if the visitors are to bounce back in the three-match series.Virender Sehwag, Sachin Tendulkar, VVS Laxman and Yuvraj Singh were among the runs in the first Test but their performances were not enough to prevent a 10-wicket defeat to Kumar Sangakkara`s men.

Team India to Leave for SL Without Dhoni 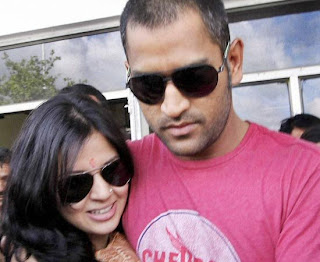 Team India to Leave for SL Without Dhoni
09-Jul-2010 04:15:00 GMT
India in Sri Lanka, 2010
Chennai: The Indian cricket team, sans newly-married skipper Mahendra Singh Dhoni, will leave for Sri Lanka from here today to play three Tests and a tri-nation ODI series starting July 18.
Pacer duo of S Sreesanth and Abhimanyu Mithun, who replaces the injured Zaheer Khan, arrived in the city, while Sachin Tendulkar will be reaching in the evening.
"Tendulkar missed his morning flight and is expected to arrive in the evening," according to the airport authorities here.
Other Indian players will be arriving here in batches and cricketers from northern region, including vice-captain Virender Sehwag, Gautam Gambhir, Yuvraj Singh and Harbhajan Singh, are expected to arrive at 10:30pm before leaving by the Sri Lankan Airlines today.
Dhoni, who recently got married to childhood friend Sakshi Singh Rawat, will be reaching Sri Lanka directly.

Posted by Mahendra at 1:55 AM No comments: