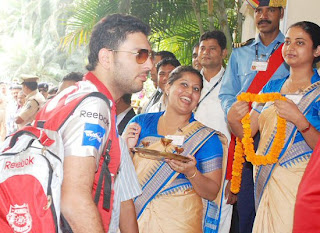 He is undoubtedly one of India’s most eligible bachelors. And has been romatically linked with some of India’s prettiest women. So, is Yuvraj Singh the natural choice for a

No thank you, only cricket for me, says Yuvraj.

The former King’s XI Punjab captain was asked during a broad-based interview with NDTV whether he had been offered a televised swayamvar by a channel.

NDTV (Prannoy Roy): Has a TV channel asked you to get married on TV, live?

Yuvraj: Yeah. I spoke to my mom today and she was saying something about a swayamvar or something…I actually didn’t know what it is so she explained it to me…I was a bit stunned…I don’t think I am going to go on that.

NDTV: So you won’t be doing it?

Yuvraj: No I don’t think so. I am very happy playing my game.

Yuvraj Singh Hits 6 Sixes in an Over