Not a captain anymore but Yuvraj Singh matters 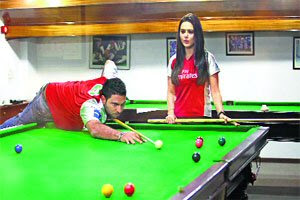 Yuvraj Singh and Preity Zinta at the PCA Stadium before a press conference on Wednesday. Kings XI Punjab plays its first match on Saturday. Jasbir Malhi

He may not be the captain anymore but the aura of Yuvraj Singh surpasses that of all other players in the Kings XI Punjab.

Whether the local hero is zipping around in his yellow BMW sports car, shooting for a team promo or playing snooker with co-owner Preity Zinta, he is the centre of attraction.

Naturally, he holds the key to his side’s fortune in the Indian Premier League (IPL).

“When one is a captain, one has to think of many things. But when you bat, you just want to bat through the innings and score runs for the team,” Yuvraj says, trying to hide the disappointment of being removed as the captain. “This IPL, I will play for Kings XI Punjab as a team member. I want to keep scoring runs for the team.”

Yuvraj, who grew up in the city, led the team in the first two editions of the tournament. In the first edition, the team lost in the semifinal. But in South African last year, it couldn’t make it to the top four.

Yuvraj has played 29 IPL matches and scored 639 runs at a staggering strike rate of 133. He continues to be the most threatening player in the entire tournament.

As the interview is going on, a young fan requests him to hit six sixes in an over in the IPL. “I cannot assure you six sixes, but I will try my level best to repeat it,” he replies.

At present, Yuvraj is recovering from an injury he suffered in Bangladesh in January. He tore a ligament in his left wrist and missed the second Test match against Bangladesh and the series against South Africa.