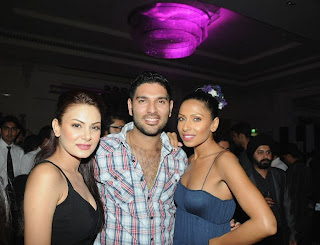 Cricketer Yuvraj Singh might not be having a great time on the field, but he certainly seems to be hitting big off it. After having being linked to various Bolylwood actresses, including his much publicised affair with actress Kim Sharma, Yuvi was spotted with model Aanchal Kumar at the IPL Nights after party recently

According to reports Yuvraj even referred to Aanchal as his girlfriend.

Cricketer Yuvraj Singh with a model at the IPL Nights after party following the 2010 DLF Indian Premier League T20 group stage match between Royal Challengers Bangalore and Kings XI Punjab at the ITC Gardenia in Bangalore.