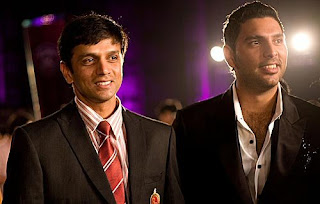 The national selection committee, which met here on Saturday, decided to recall Yuvraj Singh for the three-Test series in Sri Lanka beginning next month.

Yuvraj missed India's most recent Test series — against South Africa at home in February — with a ligament injury. The left-hander was later dropped from the one-day squad for the Asia Cup because of poor fitness and form — a decision that raised questions about his immediate future.

The selectors appear to have answered those questions by picking Yuvraj as one of eight specialist batsmen in the 16-member squad. Yuvraj did his cause no harm by training at the NCA during his time out of international cricket to improve his fitness.

Also returning to the squad, after an injury-enforced absence, is Rahul Dravid, who missed the series against South Africa after being hit by a rising delivery on the tour of Bangladesh.

At the wrong end

The return of Yuvraj and Dravid has forced S. Badrinath out. The middle-order batsman from Tamil Nadu again finds himself at the wrong end of a difficult decision with the selectors preferring Suresh Raina, who was part of the squad for the second Test against South Africa in Kolkata.

Badrinath made a gutsy half-century on debut in difficult conditions against Dale Steyn and Morne Morkel in Nagpur. But single-digit scores in his two other innings and Raina's consistent performance in the limited-overs arena appear to have cost Badrinath.

The only other change to the squad selected for the Kolkata Test is the inclusion of Wriddhiman Saha as captain M.S. Dhoni's understudy with the gloves.

Saha, who was dropped after making his debut as a batsman in the first Test against South Africa following Rohit Sharma's freak injury on the morning of the match, replaces the man who had replaced him in the squad for the second Test — Dinesh Karthik.

The selectors chose to retain the bowling unit picked against South Africa although two of its members, Ishant Sharma and Sreesanth, lost favour in the shorter forms of the game.

India will look to reverse the result of its last Test series in Sri Lanka, which it lost 1-2. The first Test gets underway in Galle on July 18. The second and third Tests, both to be played in Colombo, are scheduled to start on July 26 and August 3 respectively.