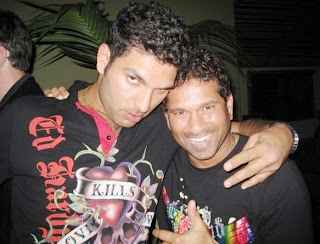 DAMBULLA: The out-out-form and
out-of-favour Yuvraj Singh may return for the three-Test away series against Sri
Lanka next month, sources said a day ahead of the team selection for the Test
squad.

Yuvraj, who was dropped from the Asia Cup squad for lack of
form and fitness, had also missed the two-match Test series against South Africa
in February due to injury. "There is a 90% chance of Yuvraj coming back into the
Test team for the Sri Lanka series," a team source told TOI.

Pacers
Sreesanth and Ishant Sharma are also expected to make the cut. Sachin Tendulkar,
of course, is available for the series, and Virender Sehwag is expected to
recover in time from the hamstring injury which curtailed his participation in
the Asia Cup.

With Zaheer Khan, Ishant and Sreesanth in the team, the
debate will be on whether to pick a fourth pacer or a third spinner. Leggie Amit
Mishra is expected to make it and the selectors may opt for Pragyan Ojha instead
of another pacer.

Middle-order batsman Suresh Raina, who was in the
Test team for the South Africa series, will also make it to the
team.

"Nothing is decided, but there will be a discussion on whether
to have a fourth pacer or a third spinner," team insiders told TOI on
Thursday.