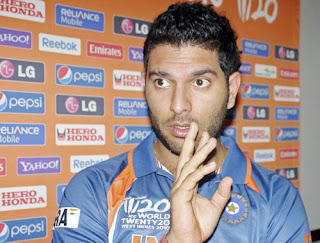 Yuvraj Singh: India's comeback king?
Yuvraj Singh will make yet another comeback in India whites after the five wise men of Indian selection panel led by Kris Srikkanth picked him up for the upcoming three Test series against Sri Lanka.
By Himanshu Dubey
His international career may have been highly incoherent, studded with some soaring success stories to few upsetting ones. But one thing that has remained constant with the destructive left-hander is the remarkable run of form he exhibits, whenever he makes a return.,
The flamboyant player was dropped from the ODI squad for the Asia Cup, after his dismal performance in the IPL and disastrous run in the ICC World T20 in the Caribbean. Not only his form, but his fitness and attitude, troubled the selectors, as they decided to kick him out of the squad for the Asia cup.
Yuvraj has proved his mettle in the ODI's and T20 cricket, but he is yet to prove himself in the longer version of the game where he has failed to live upto the hype and expectations. With only a few notable innings for him, Yuvraj will make sure that he makes most of the opportunity and let his bat do the talking rather than words.
Having talked about the perfect opportunity, one must not forget that it won't be a walk in the park for Yuvraj, considering his limitations on slow and low tracks.
To make matters worse for Yuvraj, the likes of Murlitharan, Mendis and Herath are geared up to exploit his incompetence on dead-turning Lankan tracks during the series. The free-flowing Yuvraj will have to fight for his runs, dodging the subtleties of the Lankan spin-trio by making adjustments in his technique as the ball will rarely come on to his bat, thus hampering stroke-play. If Yuvraj is able to do that then we should be rest assured of India retaining the Numero Uno Test rankings.
No one doubts the special talent he possesses but his attitude in recent times has been way off-target. Yuvraj, which we were accustomed to see was lot more bubbly and a live-wire on the field.  The southpaw which we knew was one of the best timers of the ball and was once compared with Sir Garfield Sobers, but all that is lost somewhere in midst of meaningless matches and useless night parties.
Today, the Yuvraj we see is lot more circumspect and hardly ever we see that carefree smile on his face. The fielding standard has dropped and he no more patrols the point or cover area. Yuvraj Singh is going through a bad phase but by showing faith in him, selectors have taken one last chance, you can say- that last gamble.
World knows how dangerous a batsman he is and considering his capabilities and talent, one maybe rest assured that Yuvraj is just one innings away from form and glory.
Twttter Facebook
--
Mahi