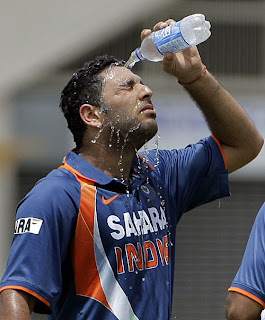 Stuart: The 19th over of this World Twenty20 matchwill be bowled by Stuart Broad.
Ash: Yuvraj is ticking, Stu. I think he's going to get after young Broad.
Stuart: Well, he's got the licence to play his shots and… oh, good heavens, did you see that fly past the window then Ash? What was it?
Ash: Sixer!
Stuart: A what? That's not a bird. I rather think it might have been a great crested grebe.
Ash: No, the cricket. Yuvraj has hit a sixer.
Stuart: A what? Oh, a six. Yes, you're quite right. India were on 171 before that delivery and the scoreboard reads 177 now, so he must have cleared the ropes. What a strapping young man he is. Now, about that grebe, Ash?
Ash: Sixer!
Stuart: No, grebe. Wait. What's going on?
Ash: Another sixer, Stu. Massive hit. Just massive.
Stuart: Well, if it's gone for six then that's pretty obvious, isn't it? Of course it's a big hit.
Ash: He's flicked it off his legs. Just massive.
Stuart: He still only gets six for it, Ash.
Ash: He should get 12.
Stuart: But he doesn't. He gets six.
Ash: Sixer!
Stuart: Jeepers. Is that two in a row?
Ash: Three, Stu. Massive hit. Just massive.
Stuart: It wasn't that big a hit. It barely cleared the ropes.
Ash: It was another 12 that, Stu.
Stuart: It was, at most, a seven. Should I put the battenburg somewhere safe? I rather feel that one of these might come into our commentary box. Wouldn't want the cake to bear the brunt of the impact.
Ash: Sixer!
Stuart: Don't say it, Stu. Don't say it. They caught that in the first row. It wasn't massive.
Ash: Massive. Absolutely massive. Four in a row. Four of the biggest sixes you'll ever see.
Stuart: They really weren't. Yes, they cleared the ropes, but they're hardly setting any distance records, are they? Be honest.
Ash: Just massive.
Stuart: Have you had too much sugar? I think I will put this battenburg away. It's clearly...
Ash: Sixer!
Stuart: Don't say it. Don't you dare say it.
Ash: Absolutely massive.
Stuart: Are you blind? It went very high, I'll give you that, but it wasn't an unusually large hit. It's not the size that's significant here, it's the fact that he's hit five in a row.
Ash: This is magnificent stuff.
Stuart: Why? Because he's hit five sixes in a row or because of how far he's hit them?
Ash: Both, Stu.
Stuart: No. Wrong. It's solely because he's hit five in a row. The size of the hits is absolutely nothing to write home about. Your critical faculties are failing you. You're all hyped-up on battenburg and you've lost your equilibrium.
Ash: Sixer!
Stuart: Stop saying that! Why can't you just say "six"?
Ash: It's six sixers, Stu!
Stuart: Not sixer sixers then?
Ash: Six maximums.
Stuart: I think that's worse. I think I prefer sixer to maximum.
Ash: Astonishing stuff.
Stuart: Maximum does make a certain sense, I suppose, but I just don't like the sound of it.
Ash: Six sixers. Absolutely amazing.
Stuart: Please say "six".
Posted by Mahendra at 5:05 AM