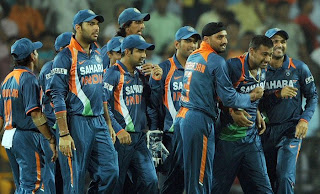 Indian batsmen squandered a good start on a perfect batting strip to go down by 24 runs to Australia in the fourth One-day international at the Punjab Cricket Association (PCA) Stadium here Monday.

Harbhajan Singh, who scored a quick-fire 31 off 25 balls, and Praveen Kumar (16) once again raised hopes of a turnaround, similar to their heroic stand in the first ODI in Vadodara, but Shane Watson (3-29) stopped them short.

Australia, struggling with injury worries on the tour, came back to square the seven-match series 2-2 and stayed number No.1 ODI team.

Put in to bat by India captain Mahendra Singh Dhoni, Australia were all out for 250 in 49.2 overs as Cameron White scored a quick 62 off 71 balls and skipper Ricky Ponting 52. Man of the Match Watson chipped in with 49 runs.

Dhoni had no doubt in mind to opt for fielding, keeping in mind the heavy dew that would play an important role later in the night. His bowlers were bang on target and left-arm seamer Ashish Nehra was the pick of the lot with his three for 37 from his eight overs while off-spinner Harbhajan Singh got two for 48 from his 10 overs.

India got off to a rollicking start through Sehwag and Tendulkar. They added 40 runs at a quick pace.

Sehwag spoiled Mitchell Johnson's birthday party by hitting him out of the attack, smashing the left-arm pacer for seven fours.

Ponting would not have brought in Doug Bollinger so early, if Johnson had not been treated so harshly. The bowling change did the trick as Sehwag failed to clear Watson at mid-off.

Tendulkar looked set to achieve his personal milestone of reaching 17,000 runs, but a poor lbw decision by Sri Lankan umpire Asoka D Silva played spoilsport. TV replays clearly showed that the Nathan Hauritz delivery was going down the leg side. In retrospect Tendulkar's dismissal might have changed the course of the match.

Dhoni, Suresh Raina and Ravindra Jadeja were back to the pavilion quickly and Australia looked in command before once again surviving the Harbhajan scare to pull through. Harbhajan hit five fours and a six during his exciting knock.

Earlier in the day, a rash of run-outs and a lower-order collapse saw Australia well short of the par total on this ground. The visitors folded up in 49.2 overs despite being well placed at 201 for four in 40 overs.

Both Nehra and Praveen Kumar gave India a good start, giving away only 37 runs in the first 10 overs. Nehra was the first to strike, trapping Shaun Marsh (5) leg before wicket in the eighth over.

Watson and Ponting played sensibly and milked the Indian bowlers for some easy runs for their 64-run second-wicket stand.

Watson was all set for a deserving half-century but Harbhajan struck with his second ball as the Australian edged to wicketkeeper Dhoni. Watson hit six fours during his 52-ball stay.

With two wickets down for less than 100 runs, Ponting and White did some repairing act but a direct throw from Jadeja ended the Australian captain's 59-ball innings that had five boundaries and a six.

White and Michael Hussey (40) then plundered the spinners in the 73-run stand.

Hussey lofted Yuvraj Singh for a huge six over wide long-on. But Yuvraj had the last laugh after Hussey was caught by Ishant at deep mid-wicket. White was run out to a direct throw from Nehra.

Australia surprisingly opted for the last power play after the 44th over, but could muster only 23 runs from it.