Gary the father figure will be missed Yuvraj Singh 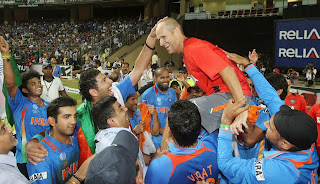 Gary the father figure will be missed Yuvraj Singh

Mumbai, April 4: For all the joy that the World Cup triumph has brought in, there is also a tinge of sadness in the Indian cricket team as it marks the end of inspirational coach Gary Kirsten's tenure and batsman Yuvraj Singh says the "father figure" would be missed.

"He always kept a check on me. He pulled me up when the chips were down. He is a father figure and I am going to miss him," Yuvraj told ICC's official website.

Kirsten, under whose guidance India became the number one Test and ODI side, ended with the team's World Cup title triumph and he has already ruled out reconsidering the decision.

"Cricket has been in the right direction since Gary came on and I hope it will remain so," said Yuvraj.

The dashing left-hander, who was named Man of the Tournament for a fine show with both bat and ball, said winning the mega-event was a dream realised.

"It's like living a dream. It still hasn't sunk in and the guys haven't slept. We have kissed the trophy about a 1000 times," he said.

"I am very proud of the team and myself. Our dream was to make the finals but to win it was extraordinary. Now I understand what it means to be a world champion," he added.