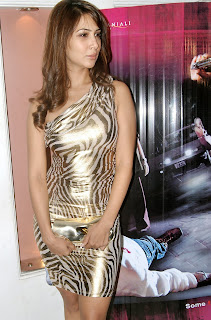 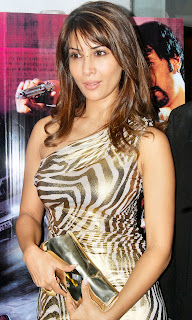 Possessive Yuvraj Singh picks up fight with Kim’s Boy Friend
Yuvraj singh may have broken up with Kim sharma long time ago, but he is still very possessive about her as he can’t see her in the arms of another men. His possessive streak was on display at a party where Kim sharma was getting rather cosy with Abhishek Kapoor.
He was annoyed and went up to Abhishek. A major argument ensued and Kim decided to leave the venue with Yuvraj.
Posted by Mahendra at 1:58 AM No comments:

Cuttack: Sri Lanka skipper Kumar Sangakkara has won the toss and opted to bat first in the third One-dayer against India at the Barabati stadium here on Monday.
Yuvraj Singh has returned to the team after missing the second game due to a finger injury and flu while Virat Kohli is rested. Dinesh Karthik will do the job behind the stumps in the absence of skipper MS Dhoni who is serving a two-match ban. Ishant Sharma is the other change among the hosts. The lanky fast bowler has replaced Praveen Kumar.
Lasith Malinga and N Kulasekara are back to the Sri Lankan team. The visitors have decided to retain the two spinners who played in the previous game in Nagpur as the Barabati stadium is known to favour slow bowlers.

Yuvraj Singh acknowledges the crowd during a practice

Posted by Mahendra at 1:17 AM No comments: With M.S.Dhoni is already out of two ODI’s, Indian team not only have batting worries now but also they have to improve in all department of the game if they would like to take the lead in the on going ODI Series against Sri Lanka. Virendra Sehwag the new leader knows he has plenty of work in his hand in the absence of M.S.Dhoni when his team will meet at Barabati Stadium,.

On the other hand is suffering from major set back with now Angelo Mathews ruling out for the rest of the series, with Thissara Perera flying in to take his place, and it's still uncertain whether Lasith Malinga will be risked after missing the first two games.

Yuvraj Singh who missed the first two ODI’s is most likely to fit and will most probably play in the crucial encounter against in 3rd ODI. The return of Yuvraj Singh not only strengthens their batting but also provide more option for the captain Virendra Sehwag.

However the main concern for is their fielding and because of this they have lost Nagpur T20I as well as one day internationals. The number of catches dropped has gone into double-figures, and the ground-fielding was equally dismal in the last game.

With the series leveled at 1-1, both teams will be keen to take the lead in the series to get their hand closer to the Karbon Mobile Cup. Indian team in the last game didn’t got flying start and that’s why they were short by 20-30 runs in the end at . Sehwag and Tendulkar are in good form will be much expected from both to deliver for the team in critical situations like this.

Yuvraj Singh: After winning the game for in T20I at Mohali, he is out of action from last two ODI’s. However with Dhoni out of action he will be the key man in the middle order of the Indian batting lineup.

T.Dilshan: Back to back century in two matches is enough to give headaches for the newly appointed Captain Virendra Sehwag. He is in prime form and if he continues to play like what he did in and will sure to take the lead by 2-1.

The pitch at Barabati Stadium, is expected to be another high scoring game. The curator of Pitch already indicated that the wicket will be more or less similar to the one used for the first ODI’s at . In such scenario team winning the toss is likely to bat first and put scores on the board to put enough pressure on the chasing team.

M.S.Dhoni who will be serving two match banned will be replaced by Dinesh Karthik and Virat Kohli is likely to make a way for stylish left-hander Yuvraj Singh. Ishant Sharma is also likely to get a game in place of Praveen Kumar who hasn’t done well on a wicket which provides less movement and support for his bowling style.

on the other hand has hit by injuries to some of their key players and that will be worrying sign for the Sri Lankan’s. However L.Malinga who missed the first two one day internationals is likely to get a game with Nuwan Kulasekara.

Likely Playing XI for both Teams (Match is Schedule to begin at 14:30 PM Time)

Barabati Stadium has been a lucky venue for who have won eight and lost four matches here so far with one game abandoned due to rain.
Posted by Mahendra at 1:03 AM No comments:

All-rounder Yuvraj Singh has been again ruled out while opening batsman Virender Sehwag is fit as India take on Sri Lanka in the second One-Day International at the Vidarbha Cricket Association (VCA) Stadium on Friday.

Yuvraj, who missed the first ODI in Rajkot with a finger fracture, is yet to recover from his injury and is also down with flu while Sehwag has recovered from the ankle injury he suffered while fielding in the last match.

After the record run feast in Rajkot, where more than 800 runs were scored for the second time in ODIs, bowlers won’t have a respite as the VCA Stadium also promises a run-friendly wicket.

Chief curator Praveen Hingnekar, however, promised that it won’t be a repeat of Rajkot, but said that a score of 300 runs or more can be achieved. Since it is a day-night match, toss will be a crucial factor.

“I expect scores of over 300 for sure. But the fast bowlers will definitely get some help early on with the new ball, and fielding first may not be a bad option,” he said.

In such a scenario, the spotlight will be again on Sehwag, who struck a whirlwind 146 in Rajkot, as India will be looking to take a 2-0 lead in the five-match series. There won’t be many changes in the side that won in Rajkot, but medium pacer Sudip Tyagi may make his debut in place of Praveen Kumar.

On a perfect batting track, Sri Lankans are in a spot of bother. Their two most experienced bowlers Muttiah Muralitharan and Dilhara Fernando have been ruled out with injuries. They have brought in two off-spinners, Muthumudalige Pushpakumara and Suraj Randiv in the squad in Muralitharan’s absence.

After missing out the first match due to an injury, fast bowler Lasith Malinga is likely to make a comeback to bolster the attack. Mystery spinner Ajantha Mendis can also come in as a replacement for Muralitharan.

Posted by Mahendra at 5:32 AM No comments:

Yuvraj Singh down with Flu! News

Sizzling southpaw Yuvraj Singh who had missed out in the first ODI at Rajkot due to a finger strain is more than likely to miss tomorrow's second ODI as well. The left hander is down with flu according to the Indian Skipper MS Dhoni.
The Indian camp is in trouble starting with Sreesanth's swine flu and the suspected infection to Gautam Gambhir along with members of the supporting staff in the recent days. The latest was the news of mental conditioning Coach Paddy Upton testing negative for the H1N1 influenza.
The good news for India is that Virender Sehwag who had twitched his knee on the Rajkot outfield has been declared fit to play tomorrow's day/night affair at Nagpur. Despite missing Yuvraj in the line up, India went onto score 414 in the first ODI at Rajkot. Virat Kohli is certain to get one more game due to the non-availability of Yuvraj.
Posted by Mahendra at 1:25 AM No comments: A cricket fan clicks a photograph of Yuvraj Singh and Sri Lankan captain Kumar Sangakkara during a practice session in Rajkot. India play five One Day Internationals (ODI) against Sri Lanka with the first ODI starting December 15 at Rajkot.
Posted by Mahendra at 2:32 AM No comments: Yuvraj Singh and teammate Sachin Tendulkar wait during a practice session in Rajkot. India will play five One Day Internationals (ODI) against Sri Lanka with the first ODI starting December 15 at Rajkot.
Posted by Mahendra at 2:29 AM No comments: 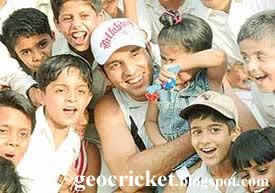 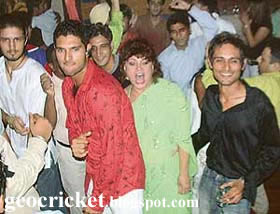 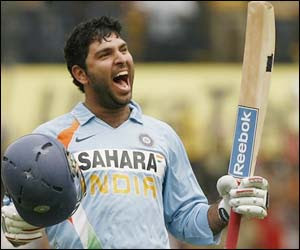 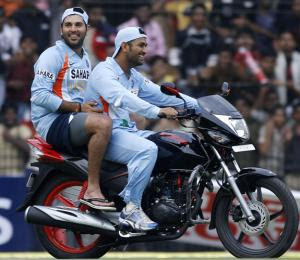 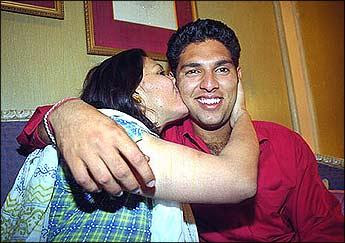 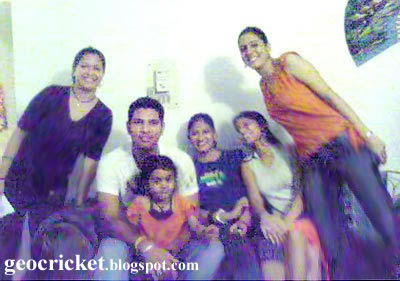 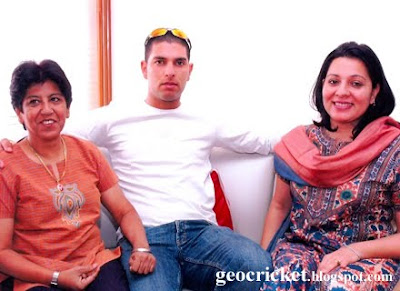 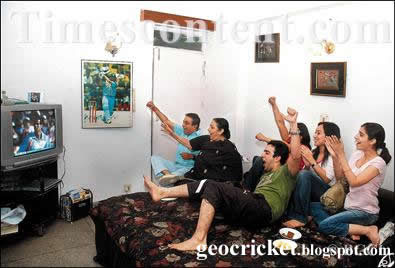 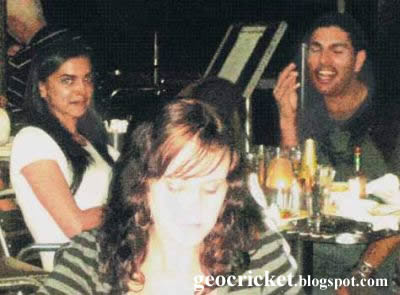 Dino Morea and Yuvraj Singh came together to support a social cause through Make A Wish Foundation. They gave away bats and cycles to the kids. Hope this initiation, steer more celebrities to socia.
Posted by Mahendra at 12:29 AM No comments:

has been sacked as captain of Kings XI Punjab ahead of the third season of the IPL.

No replacement has been named yet, according to reports.

Yuvraj, who was the icon player of the franchise, led them to the semi-final in the first edition. But with a 7-7 win-loss record, the team failed to make the last four in the second edition played in South Africa earlier this year.

Posted by Mahendra at 7:32 AM No comments:

Deepika Padukone who had a recent split with her actor boyfriend Ranbir is in a hunt for a eligible mate these days. It is already a fact that the actress is in touch with her past boyfriend Yuvraj Singh who is a lead cricketer in Indian cricket team.

On December 6th, 2009 as soon as the India won the test match against Srilanka to clinch series and also to least the test cricket rankings table, Deepika is said to have called Yuvi on his mobile and congratulated him for being a part on a winning team.

Late in the evening, Yuvraj Singh called on Deepika and chatted with her for almost an hour which is said to be the hot topic in the Bollywood industry.

Posted by Mahendra at 7:54 AM No comments: 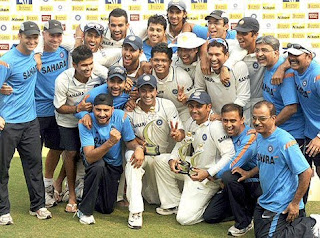 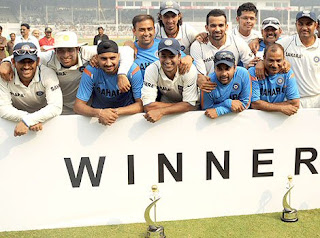 Indian team celebrates the victory against Sri Lanka in the third and final Test match in Mumbai. India won by an innings and 24 runs to become the No 1 team in the ICC Test Rankings. 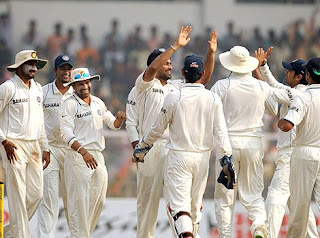 Players congratulate Zaheer Khan for taking the wicket of Sri Lanka's Nuwan Kulesakara on the final day of the third Test between India and Sri Lanka in Mumbai. India won the match by an innings and 24 runs.
Posted by Mahendra at 12:14 AM No comments: 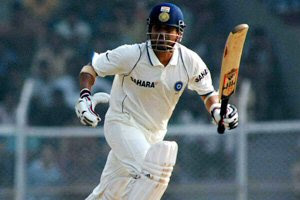 At 36, Sachin Tendulkar may be the oldest member of the Indian cricket team but he clearly resents being called a grandfather by his teammates.

Recently when Tendulkar celebrated his 20 years in international cricket, Yuvraj Singh had jokingly said that the veteran batsman was called a 'grandfather' in the Indian dressing room now.

"We have started calling him grandfather," Yuvraj had quipped.

Asked what he thought of the reference, Tendulkar said, "I warned him to think twice before calling me grandpa because I have many names to call him in front of the camera."

Tendulkar said even he has a few nicknames for Yuvraj but refused to specify what they might be.

"I have many names for him too, which I cannot reveal in front of the TV camera. I am not revealing them now as I am giving him a chance after my warning," he told a TV channel.