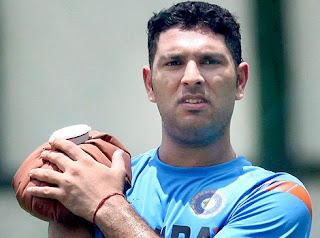 India's campaign in the Champions Trophy was dealt a severe blow even before they played their first match as Yuvraj Singh was ruled out of the tournament after injuring himself at practice on Wednesday.

Yuvraj suffered a fractured finger in his right hand while attempting to take a catch during fielding practice and tests confirmed that he has been ruled out for at least six weeks. Yuvraj was initially attended to by team doctor Nitin Patel, but could not either bat or bowl in the net session that followed the fielding drills.

Virat Kohli will replace Yuvraj and has been given the go-ahead to join the team in South Africa by the ICC's tournament technical committee. Gautam Gambhir will be the team's new vice-captain.

After a couple of modest outings in the tri-series in Sri Lanka Yuvraj finally hit his straps in final with a breezy half-century against the home side.

The loss of vice captain Yuvraj further weakens the team, which was anyway without the services of its fast bowling spearhead Zaheer Khan and explosive opener Virender Sehwag, both of whom are yet to recover from shoulder surgery. Kohli's return to the team is similar to his arrival in Sri Lanka, where he was brought in as a replacement for Gautam Gambhir, who aggravated a groin strain.

After arriving in South Africa India played one practice match, losing by 103 runs against New Zealand at Potchefstroom on Sunday. Since then the team has been having long workouts.

India play their first match, against Pakistan on Saturday.